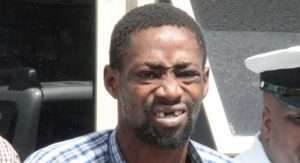 iwnsvg.com- One year after the businessman who shot him during a break-in urged him to stick to fishing, Alonzo Bailey was, on Monday, again before the Kingstown Magistrate’s Court, where he pleaded guilty to an attempted burglary charge.

However, unlike last year July, when he blamed rum, the 32-year-old man, who has has12 convictions over the past five years, blamed “obeah” (witchcraft) for his actions and asked to be sent to prison for a long time.

Bailey did not wait for the charge to be put to him when he told Senior Magistrate Rickie Burnett, that he was guilty.

The charge was that on July 13 — last Saturday — with intent to burglarise the liquor and provisions shop of Esther Stowe, of Green Hill, he did an act which was more than merely preparatory to the commission of the offence.

The facts of the case are that Stowe secured her shop around 9 p.m. Friday night only to be awoken around 3:05 a.m. Saturday by persons who had caught Bailey trying to burglarise the business place.

The police responded and the persons who had caught Bailey in the act handed over to them a screwdriver, a clipper and a piece of steel that he had with him at the time.

“So, someone like you, I am not sure about rehabilitation,” Burnett told Bailey.

Bailey told the court that he has been unsuccessful in securing employment. He said when he checks with persons, including his father, they tell him they don’t want any workers.

“You sure that’s what they’re telling you?” the magistrate asked Bailey.

The repeat offender then told the court that a man had told him that he (the man) would work obeah (cast a spell) on him.

Bailey told the court that the man had said the effect of the obeah would be that he would not stop going to prison until he dies.

He said he had even gone as far as getting baptised in an effort to rid himself of the obeah.

“Well, you have to do something before you baptise,” Burnett told Bailey, adding that baptism alone would not cause him to change

“Something wrong with me; somebody do me something,” Bailey told the court.

The magistrate, however, said he does not believe in obeah or what Bailey said about the alleged spell.

Bailey asked the magistrate to help him get a job, saying he can plaster and lay brick.

In her submission on sentencing, prosecutor Constable Corlene Samuel said that while Bailey was asking the court for sympathy, he did not have any on the persons whose places he tried to burglarise.

“Your honour, this man was shot last year in somebody’s business place,” she said

Earl “Groove Governor” Abraham, of New Montrose, had gone to the bar around 8:20 a.m. after seeing remotely, on his CCTV system, that someone was burglarising the business place.

When he arrived there, Bailey attacked him and Abraham used his licensed firearm to shoot Bailey in the right foot.

Abraham, who had shot and killed another burglar when his bar was at another location in Kingstown, had noted that Bailey could have been killed.

The businessman had told the court that Bailey’s father had told him that Bailey is a good fisherman.

He urged Bailey to put to use his skills in that regard and they shook hands before Abraham left the court.

On Monday, Burnett also said that Bailey could have been killed last year.

“You are a lucky man to be alive today,” he reminded Bailey.

Bailey responded: “Somebody put me fuh dead. I doh know what going on.”

When the magistrate engaged Meisha Cruickshank, a lawyer who was at the bar on this matter, she told the court that her heart is not strong enough to do criminal matters.

The lawyer further said she was not sure what another custodial sentence would do for Bailey.

Cruickshank recommended that an institution be set up “that some of these miscreants can be sent to learn a trade.”

“He could have been dead then and he is back for the same thing,” Burnett lamented.

Bailey then asked to be put in jail for a long time.

The magistrate told Bailey that he did not believe anything he was saying, adding that the man was just saying so because he knew he is facing jail time.

Burnett told Bailey he would give him sympathy but would give more to the complainant.

“I don’t fool around with crime at all. These are different times and the court must reflect the times in which we live,” Burnett said.

He said that the types of sentences that people would want the court to impose on offenders such as Bailey are not on the law books as yet.

“If you don’t want to come to court, stay out of trouble. But, for the next nine months, sit in prison and consider your ways,” the magistrate told Bailey.

Regarding the man’s request that the court help him find a job, Burnett told him that when he is released, he should visit the Social Welfare Department and seek their assistance.