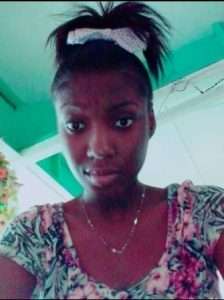 NEWS ROOM GUYANA- A young lady is battling for her life at the Georgetown Public Hospital after she was reportedly shot in the neck by her boyfriend who then allegedly shot himself in the head.

Dead is Daniel (only name so far) and injured is Faith Thompson. Barbara Robinson, who lives in the bottom flat of the rented house, told the News Room that the young couple has an ongoing case in the court after Faith alleged physical abuse at the hands of Daniel.

Robinson explained that Faith only moved into the house with her Uncle and Grandmother some two months ago and that Daniel would usually visit.

According to Robinson, she would usually know when Daniel visits since he would use the gate and she would see him but this time around, she had no idea he was in the house.
Robinson assumed that Daniel jumped the fence and the window to gain access to the house.

According to the neighbour, when Faith’s Uncle arrived home, he was pleading with her to open the door to her bedroom but she refused.

Robison told the News Room that the Uncle picked up a piece of wood and threatened to beat both Daniel and Faith if they did not open the door when he heard the gunshots.

The neighbour said that Faith ran out of the bedroom and unto the road covered in blood when Daniel reportedly turned the gun on himself.

The Police are investigating.