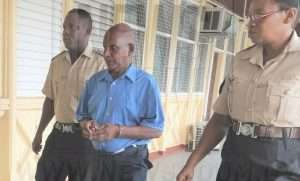 Ramkissoon admitted that on January 4, 2016, in the county of Demerara he engaged in sexual activity with a 4-year-old girl.

Justice Morris-Ramlall before imposing the sentence took into consideration Ramkissoon’s age and the fact that he threw himself at the mercy at the Court by pleading guilty.

Ramkissoon was sentenced to 20-years jail with the possibility of parole after serving 15 years.

He is also serving a sentence of indecent assault and sexual assault committed on the same victim.