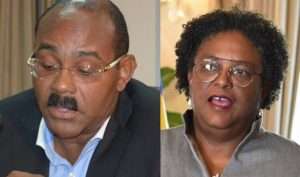 Antigua and Barbuda Prime Minister Gaston Browne has rejected Barbados’ offer of US$44 million for a portion of its shares of LIAT.

Speaking on his weekly radio show on Pointe 99.1 FM, Browne said the price Barbados put on the table was higher than the actual worth of the debt associated with three planes that the shareholding Governments are paying loans for to the Caribbean Development Bank.

He said the planes are worth US$10 to US$12 million each and Barbados owns roughly 50 percent which is around US$18 million.

He said if his Government decides to buy half of Barbados’ shares, that amounts to nine million US dollars.

He said any additional investment made by Barbados into the airline has to be considered as sunk costs.

“Rather than selling the planes to a third party we say we will step in and assume their shares which is US$18 million,” he said, stating that he does not know where the US$44 million figure came from.

“I said to the Prime Minister of Barbados that I am disappointed that my guys even contemplated US$44 million. She knows my position and she has come down,” he said declining to reveal more information.

He said if they cannot come to an amicable settlement, his Government will invest directly into the airline.

SGU Starts The Process To Welcome Students Back To Grenada