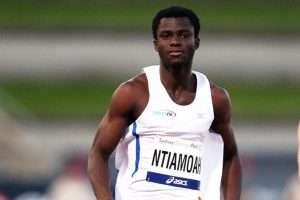 NEW YORK POST- An Olympic athlete picking up party supplies for his son’s first birthday tragically ran over the boy in the driveway of their Australian home — killing him, a report says.

Aussie track star Isaac Ntiamoah, 36, was running errands for son Josiah’s first birthday party Friday when he accidentally hit the child with his SUV at their Green Valley home in Sydney, the Daily Telegraph reported.

Ntiamoah’s wife Angelina, a schoolteacher, witnessed the tragic incident and pulled Josiah out from under the car, rushing him to Sydney’s Liverpool Hospital, where he died a short time later.

Ntiamoah — who helped represented Australia at the 2012 London Olympics — was reportedly suffering from such severe shock that he unable to speak to police investigators about the tragedy until Saturday morning.

Neighbors said the couple had been overjoyed by Josiah’s birth after a long period of trying to conceive. The boy had only just learned to walk, they said.

Police have taken Ntiamoah’s car for forensic examination, and the 36-year-old father has undergone mandatory urine and blood tests, but the boy’s death is being treated as a tragic accident.

In a statement, the family called Josiah their “miracle baby” and asked for privacy.

“We cannot believe he is no longer with us,” the statement read. “What we do know is that he is with his heavenly father, and we trust that God will help us in these painful days ahead.”

The Australian athletics community have rallied behind the Ntiamoah family and offered its support.

“Our community share their collective thoughts and condolences with Isaac and his family at this terrible time,” Athletics Australia tweeted Saturday.