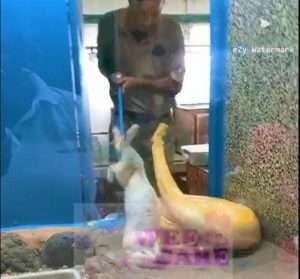 The incident took place shortly after midday and the exhibit – a yellow phyton was at the time being viewed through its glass showcase by several children and accompanying adults.

Bonyun in a recent interview with the T&T Guardian said he had been bitten numerous times by different species of snakes over the 27 years he has been working at the zoo.

He did give advice on what to do if bitten by a snake, including making sure the wound is free from bacteria, using an alcohol-based substance and cleaning the wound.

“Snakes carry bacteria in their saliva that causes an infection that may be bad. The teeth of snakes are very smooth and don’t rupture tissues and rip out the flesh which is something you don’t have to worry about too,” he said.

In a release the Zoological Society of Trinidad and Tobago (ZSTT) confirmed the authenticity of a video that went viral on social media.

It stated that the incident took place just after the zookeeper placed food for the python.

“With the door still open, the python grabbed the midsection of the zookeeper,” it noted.

It added that in keeping with the protocol of always having two zookeepers present during feeding, the second zookeeper was able to intervene, pull away the python and secure it, and assist his colleague in getting medical attention, “A full investigation is underway.”

“The Emperor Valley Zoo assures that there was no danger to the public. The Zoological Association of America of which the ZSTT is a member has been notified and would also review the incident, ” the release stated.