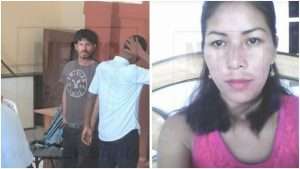 newsroom.gy- Randy Cozier, a 24-year-old grass cutter, was remanded to prison Wednesday by Chief Magistrate Ann McLennan for the murder of his sister, 25-year-old Cynthia Cozier whom he allegedly brutally chopped to death at Waramuri Village, Moruca, North West District.

Cozier, also of Moruca, stood emotionless before the Chief Magistrate at the Georgetown Magistrate’s Court and was not required to plea to the capital offence.

Police Prosecutor, Gordon Mansfield told the court that on July 3, 2019, the defendant went to his sister’s home in Waramuri Village where he reportedly hit the victim’s 8-month old baby to the head with a brick.

Cynthia, who was a mother of three, intervened when the suspect allegedly armed himself with two cutlasses and chopped her multiple times to her neck and body.

She was rushed to the Suddie Public Hospital, Essequibo Coast where she subsequently died.

The victim’s son Kevin Suddeen and sister Beverly Cozier were also allegedly chopped by the defendant; they remain in a stable condition at the Suddie Hospital.

The Chief Magistrate remand Cozier to prison until August 5, 2019.

He was also placed under the supervision of a probation officer for counselling.