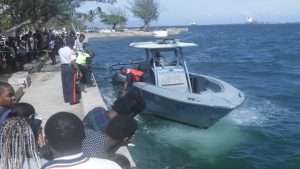 loopjamaica.com- Criminals in downtown Kingston went to a new low on Tuesday when they stole items from the location on the Kingston waterfront while a man was drowning in the waters below.

The man, who has been identified as Christopher McKnight, died after he jumped from the ledge along the waterfront in what is believed to have been a case suicide.

During the tragedy, the breakdown of morals in the society were on full display, as amid the frantic emotions of some onlookers, some persons were more concerned about removing items that the man had left on the ledge at the waterfront.

The development was told secondarily to Loop News by a man who was called to the scene to recover the body from the water.

“Imagine, I hear say the man came down to the waterfront, took off his clothes, took of his chain and shoes, and then took out his wallet,” said the diver.

“These were all items he left on the left edge close to the waterfront, and by the time he jumped off, within minutes of that happening, those items were gone,” added the concerned citizen.

“A mean, people were more concerned with stealing the items the man had left, instead of helping,” said the man.

According to an alleged eyewitness to the drowning incident, McKnight jumped into the water at about 3:00 p.m. from the edge of a ledge along the waterfront.

A woman at the scene told Loop News that McKnight was sitting on a bench at the waterfront before he took off his other stuff and finally his shoes, then smoothly dived into the water. She said it was after he started struggling in the water that she realised that he could not swim.

An alarm was raised, but McKnight drowned before help could get to him, the woman related.

The marine police were summoned, and with the help of a civilian volunteer diver, they were able to recover the body.

The police at the scene theorised that McKnight committed suicide.

The City Centre police are investigating the incident, one of a number of recent drownings at the waterfront.