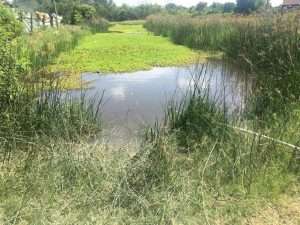 newsroom.gy- A one-year 11-month old baby boy lost his life on Monday afternoon after he reportedly drowned in a pond next to his mother’s Number 52 Village, East Corentyne Berbice home.

Dead is Brieston Akrie, who was discovered floating head down in the pond by his 27-year-old mother Patricia Davie at around 15:30hrs.

Davie told the News Room that the toddler was playing with his three siblings outside while she was making his porridge in the kitchen.

It is alleged that the siblings – ages 8,6 and 4 – left the baby boy unattended when he fell and drowned.

The mother told the News Room that some 30 minutes later after making the porridge, she realized that the baby boy was missing and that was when she raised an alarm and launched a search for him.

Upon seeing his body inside the pond, the distraught mother said she jumped inside and retrieved his lifeless body.

The Police subsequently arrived at the scene to conduct further investigations.

The child’s body is currently at the Skeldon Hospital Mortuary awaiting a post mortem examination.