Trinidad: 2-Year-Old In Critical Condition After Being Hit By Pick-Up Truck 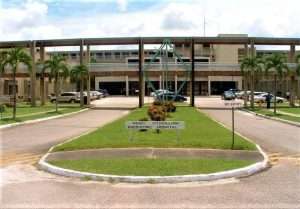 trinidadexpress.com- A two-year-old girl is in critical condition at the Mt Hope Hospital after being struck by a car in Arima.

It happened at about 10.15a.m. on Monday along La Retreat Road, Arima.

The 29-year-old driver told police that he was in driving along in his Nissan Frontier when he saw a group of pedestrians standing on the pavement.

A toddler suddenly stepped into the roadway and was hit by the pick up truck.

The child is at the Mt Hope Hospital being treated for haemorrhaging to the brain, a broken collar bone, two fractures of the vertebral column, two lacerations to the liver and multiple abrasions about her body. She is in a critical condition, unresponsive and supported by machines.

This incident came just days after two-year-old Terracina Ariel Meena Moonilal was killed after she was run over by a truck.

The toddler manoeuvred her way around a barrier, ran out onto the road and into the path of a truck, which had stopped infront of the home to ask for directions along Old Agua Santa Road, Wallerfield.