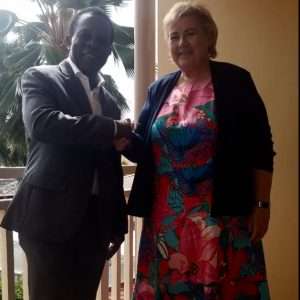 Strengthening relations between Grenada and Norway was the focus of recent bilateral discussions between the Prime Ministers of both countries.

Prime Minister, Dr. the Right Honourable Keith Mitchell met with his Norwegian counterpart, Honourable Erna Solberg on the fringes of the just concluded 40th Regular Meeting of the Conference of Heads of Government of the Caribbean Community.

Dr. Mitchell said, “Friday’s meeting was an opportunity to discuss a range of topics including Grenada’s economic recovery; Grenada’s pioneering role as it relates to climate change and the blue economy; possible technical assistance for oil and gas exploration and initiatives being undertaken to address unemployment among young people. The discussions were quite fruitful and I look forward to the creation of stronger relations between our two countries.”

The Norwegian Prime Minister was keen to learn more about the remarkable progress made with the Grenada economy and Dr. Mitchell highlighted the 5.2% growth in 2018 which the Caribbean Development Bank has recognised as a leading growth rate in the region; the corresponding significant reduction in unemployment and the increasing level of opportunities being created to foster youth development.

Dr. Mitchell said, “Creating sustainable opportunities for young people is recognised as one of the critical factors for any country’s development and as such, we discussed ways to meet the challenge of educating our young people and providing them with the tools to effectively capitalise on opportunities and to be innovative in creating self-employment.”

Looking at the regional picture, the two leaders discussed the problem of high debt which affects many countries and which, is oftentimes exacerbated by the impact of natural disasters. Since the devastating impact of Hurricane Ivan in 2004, Grenada has been a proponent of hurricane clauses written into debt instruments which would help to alleviate additional hardship on countries in times of natural disasters, due to stringent loan repayment terms.

The CARICOM Single Market and Economy was one of the key agenda items at the CARICOM Heads of Government meeting and it also featured prominently during the bilateral discussion with Norway, with the leaders looking at challenges with the implementation of CSME.

On the international level, Norway recently announced that it would double its contribution to the Green Climate Fund and Dr. Mitchell, like his CARICOM colleagues, commended the country for the additional support pledged in this period of replenishment. Grenada is already a significant beneficiary of GCF funding, with grant support of EC$125 million being provided for a Climate Resilient Water Sector Project.