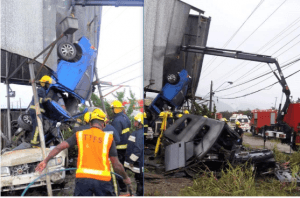 Some com­muters re­port spend­ing more than three hours in traf­fic, de­spite all three lanes be­ing open. An au­top­sy will be con­duct­ed to de­ter­mine if Pol­lard suf­fered a med­ical emer­gency while he was be­hind the wheel.