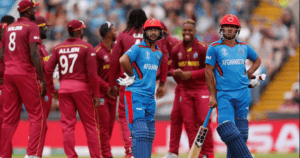 BBC- West Indies produced a defiant display to beat bottom side Afghanistan by 23 runs in the World Cup at Headingley.

Having lost five successive matches, the Windies were only one place above the winless Afghans but Shai Hope, dropped on five, made an assured 77.

Afghanistan were all out off the final ball for 288, 18-year-old wicketkeeper Ikram Alikhil scoring 86 in their highest score batting second in ODIs.

Afghanistan finish their campaign without a victory but they were in contention once again, having lost in the last over to Pakistan and by only 11 runs to India.

They were by no means outsiders against the Windies, having won three of their four completed previous encounters, including both matches in the qualifying tournament in Harare last year.