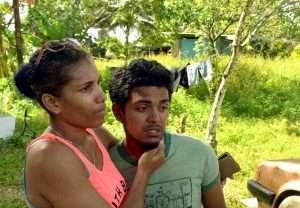 trinidadexpress.com- BABY-proofing their home was not enough as a family’s worst nightmare became a reality yesterday morning when their two-year-old daughter manoeuvred her way around a barrier, ran out to the road and into the path of a truck.

In a matter of seconds, baby Terracina Ariel Meena Moonilal, who turned two in May, lost her life. Around 8 a.m. yesterday, Terracina’s mother, Corine Charles, was at home along Old Agua Santa Road, Wallerfield, looking after the toddler and her nine-month-old sister.

Other relatives were also in the house, including uncles, aunts and cousins of Terracina.

Another relative exited the home and put a barrier back in place to prevent the toddler from getting out, the Express was told.

He was then flagged down by a truck driver seeking directions.

The driver then drove away.