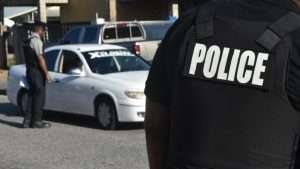 looptt.com-Police officials swooped down on a house in Diego Martin on Saturday, rescuing six Venezuelan women and detaining several suspects in connection with a suspected human trafficking ring.

Police Commissioner Gary Griffith told LoopTT that this is the result of heightened strategic operations by the Trinidad and Tobago Police Service (TTPS).

On June 29, 2019, officers of the Special Operations Response Team (SORT), assisted by Counter-Trafficking Unit (CTU), the Crime Scene Investigation (CSI) unit and the Guard and Emergency Branch (GEB) conducted an operation in Diego Martin based on information that several people were being detained in an alleged human trafficking ring.

Officers went to the house and rescued six Venezuelan women who were being held captive in the house.

Four suspects, male and female, were arrested for human trafficking.

Griffith said that through strategic operations such as these, the TTPS is succeeding in cracking down on human trafficking and other crimes.

“Because of the TTPS being successful in these matters, people perceive this as being an increase in crime. For example, because we were successful in rescuing people who had been kidnapped, it became the perception that kidnapping had been increased, however, it was just the opposite.

“Because of these persons being held and because the victims were released without the ransoms being paid, which had not been done before, as these cases were so high-profile, people were under the impression that the cases had increased, which was not the case,” he said.

Griffith said, in fact, there has been a reduction in the number of kidnapping cases compared to previous years.

“Because of the success we have been seeing (in catching kidnappers), we’ve found systems to beat them at their game.”

“Similarly, because we’ve been successful in rescuing victims (of human trafficking), which was never done before, the question is being asked did it increase, when we are now finally able to put an end to human trafficking by rescuing these victims and arresting those involved in human trafficking,” he said.

In February 2019, police rescued 19 girls between the ages of 15 and 19, some of whom were Venezuelan, from locations in Port of Spain and Westmoorings, in what was thought to be a major sex trafficking ring.

Several suspects, some of whom were of Chinese descent, were held by the authorities in connection with the incident.

In May, Venezuelan officials said nine people were held in Venezuela in connection with a suspected human trafficking ring between Venezuela and Trinidad and Tobago.

The development came after several people went missing while travelling to Trinidad and Tobago after the boats in which they were travelling capsized at sea.

Many of the passengers, several of them women and children, were still missing up to June 2019.

Venezuelan deputy Carlos Valero said these human trafficking rings form part of a criminal network which takes women and men from Venezuela to exploit them, enslaving women into prostitution rings and putting the men into factories and farms.