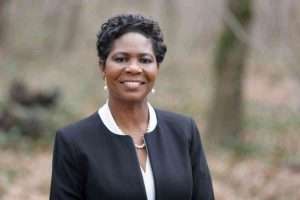 caribbeanlifenews.com- A Grenadian-born court attorney referee in Brooklyn certainly got the message out, as she won by a landslide her bid for a Civil Court judgeship in New York’s Democratic Party Primary on Tuesday.

In what was initially characterized as a “dogfight” with African American Edward “Ed” King, in a two-way race in Kings County (Brooklyn), Derafim Bernadette Neckles resoundingly trounced King by a massive 44.06 percentage point.

According to the unofficial election night results by New York City’s Board of Elections, with 99 percent of polling precincts reporting, Neckles received 31, 160 votes to King’s 11, 994 votes.

There were 339 write-in ballots, accounting for a total of 43, 493 votes cast in the judicial Primary.

“I am humbled and thankful to everyone who encouraged, supported and put their trust in me,” Neckles, whose victory will enable her to serve a 10-year term as a judge in the Kings County Civil Court in Brooklyn, told Caribbean Life, in an exclusive interview, on Wednesday.

“It was great team work that led to my success,” she added. “I look forward to serving in the position as a Civil Court judge.”

Like small claims and some landlord-tenant disputes, the Civil Court in Brooklyn addresses civil cases involving US$25,000 or less.

Neckles is expected to win the November general elections in the overwhelmingly Democratic New York State.

Just before her Democratic Primary win, Neckles had expressed strong confidence of victory.

“As we approach the count down to the Jun. 25 Primary, we are getting the message out in the community that I am the best candidate for the countywide Civil Court seat,” she told Caribbean Life then. “We are also encouraging everyone to exercise their right to vote.

“I am optimistic about winning the race,” she added. “I possess the integrity, experience and legal scholarship necessary for the position.”

Neckles said she was vetted by many screening panels, including the New York City Bar Association, the Brooklyn Bar Association and the Kings County Democratic Screening Committee, and was “found qualified to be a Civil Court judge.”

In addition, Neckles said she was endorsed by many Democratic district leaders, elected officials and community organizations.

She said she vied for the position for two reasons: first, to achieve her personal dream of becoming a judge; and, second, “to promote justice, fairness and equal treatment under the law for everyone, including Caribbean-born folks now residing in Brooklyn.”

Neckles earned her bachelor’s degree in economics, with honors, from Brooklyn College and her doctor of jurisprudence (JD) degree from the University of Miami School of Law. She has been admitted to practice law in New York and Florida.

During her tenure as the judge’s legal advisor, Neckles said she “counseled and advised” the judge on a multitude of legal matters, researched complex issues, drafted hundreds of decisions and orders, and mediated and settled cases.

She said she gained “a valuable insight into, and the working knowledge of, the powers, duties, and responsibilities of a trial-level judge.”

In addition, Neckles assisted the administrative judge in the development of court policies and procedures, and the implementation of new programs for the Kings County Supreme Court, Civil Term.

For the past seven years (2012 to current), Neckles said she assumed a quasi-judicial role as a court attorney referee in Kings County Supreme Court, Civil Term.

Neckles said her commitment to the Brooklyn community is illustrated by her extensive pro bono service.

She has been volunteering as an arbitrator in the Small Claims Part of Kings County Civil Court for the past 14 years, where she presides over small claims matters.

Despite losing handsomely to Neckles, Bedford-Stuyvesant, Brooklyn resident King, who has been practicing law for 35 years, said he had “campaigned tirelessly in every corner of Brooklyn to be elected Civil Court judge for Kings County.”

King – who is married to Caribbean American, New York Supreme Court Justice Kathy King, the daughter of Montserrat immigrants — said he had attended over 100 meetings “to talk with friends, neighborhood groups and political clubs.”

As a solo law practitioner, King said, over the years, he specialized in general civil law practice.

He earned his JD degree from Antioch Law School in Washington, D.C. in 1983.