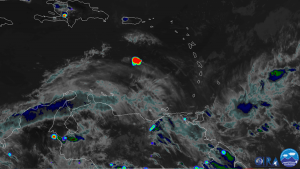 NASA’s Asteroid Watch, part of the Planetary Defense Coordination Office, said asteroid 2019 MO was about 13 feet, too small to pose a threat. The asteroid hit the atmosphere on June 22 over the Caribbean Sea — below Puerto Rico.

NOAA’s GOES-16 recorded a bright flash over the sea about 170 miles south of Puerto Rico.

A team of scientists at the University of Hawaii at Manoa said it was able to detect the asteroid before it hit the atmosphere. The university said the asteroid was detected four times in 30 minutes by the ATLAS facility on Mauna Loa.

The university said when it was first detected, the asteroid was only about 311,000 miles from Earth — about 1.3 times the distance from the Earth to the Moon.

The asteroid exploded on impact with 3-5 kilotons of energy, reported EarthSky, a long-running NPR station devoted to all things space which spoke to an astronomer and meteor expert.

For comparison, the Little Boy atomic uranium bomb that was dropped over Hiroshima during World War II, exploded with about 15 kilotons of energy.

Small space rocks and other fragments continuously rain down on Earth’s atmosphere, but impacts like the one on June 22 only happen once or twice a year, according to NASA’s Center for Near Earth Object Studies.