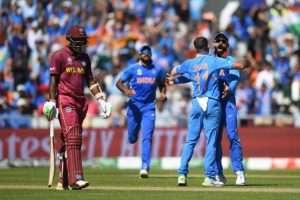 BBC- India moved a step closer to the World Cup semi-finals and ended West Indies’ slim hopes of qualifying with a 125-run thrashing at Old Trafford.

It was an underwhelming response from West Indies after they were economical with the ball and tidy in the field.

Virat Kohli made 72 as India worked hard in front of a vociferous crowd, and MS Dhoni’s unbeaten 56, which saw him take 16 runs from the final over, propelled them to 268-7.

West Indies were ultimately dismissed for 143 with 94 balls remaining and will be left to rue a impatient batting performance on a slow pitch.

India are the only unbeaten team in the tournament and yesterday replaced England – their next opponents – at the top of the one-day rankings.

They will head to Edgbaston on Sunday with plenty of confidence, knowing that victory will secure their semi-final berth and make England’s task to qualify even more difficult.