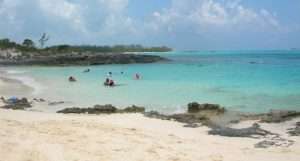 NASSAU, Bahamas (CMC) — A 21 year old tourist from the United States died following a shark attack in The Bahamas on Wednesday.

According to the police, the woman, who has been identified as Jordan Lindsay from the state of California, was on a snorkeling expedition with her family when she was attacked by three sharks near Rose Island, near New Providence.

Deputy Commissioner of Police Paul Rolle of the Royal Bahamas Police Force said Lindsay was bitten on her arms, legs and buttocks and her right arm was bitten off.

She was rushed to Doctor’s Hospital here, where she was pronounced dead.

Rolle said that an autopsy would be performed and the body would then be transported to California by the US Embassy.

She was the only victim in the attack.

Meanwhile, in the aftermath of the tragedy, the Ministry of Tourism, on behalf of the Government expressed its condolences to Lindsay’s family and friends.

“Investigations into the incident are ongoing and further details will be released when available,” the statement said.

In the meantime, the Ministry of Agriculture and Marine Resources has issued precautionary advisories to the public.