14 Member Swim Team To Compete AT CCCAN In Barbados 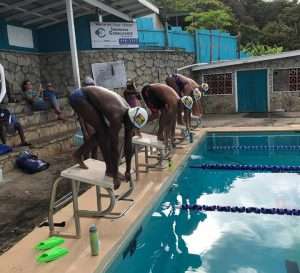 The Grenada Amateur Swimming Association is pleased to announce our National Team for CCCAN 2019! Barbados will be the home for the staging of the 2019 Central American & Caribbean Amateur Swimming Confederation Championships (CCCAN) from June 28 – July 8, 2019.

The completion spans four aquatic disciplines. The competition dates are:

Grenada will be competing only in the swimming competition from June 28th to July 3rd 2019 against over 28 teams from across the Caribbean & Central America.  The competition is projected to be a highly competitive championship among the federations that form the CCCAN body.

The National team will include our seasoned overseas-based swimmers Oreluwa Cherebin and Kerry Ollivierre.   The full squad includes:

The 2019 CCCAN Championship marks the first appearance for 4 of the 14-member team; they include Sara Dowden, Nathan Fletcher, Nicholas John and Eli Zerpa.

“The CCCAN Championships is a significant event on the GASA annual swim calendar, “ states President of GASA, Peron Johnson.  As a highly competitive and widely recognized Regional competition CCCAN will provide a platform for senior swimmers Delron Felix and Kerry Olliverrier to attain qualifying times in their bid to secure a spot at the 2020 Olympics in Tokyo, Japan. Additionally with the PANAM Games in Peru quickly approaching, CCCAN also serves as another qualifying opportunity to solidify participation at these Games.

On the heals of CCCAN, Delron Felix, Kimberly Ince and Kerry Ollivierre will depart for Gwangju on the South Korean peninsula to compete at the FINA World Championship in mid July.  Both Felix and Ince will continue on to the PANAM Games in Peru later in August, while Zackary Gresham, Jenebi Benoit and Anaika Charles will head to Budapest Hungry in August for the FINA World Junior Championships.

July and August are busy month for an increasing number of our swimmers who are gaining additional opportunities to represent Grenada on the international stage.  The Grenada Amateur Swimming Association is grateful for the support received from the Ministry of Sports, National Lottery Authority and the Grenada Olympic Committee in order to make it possible for the team to participate at the CCCAN Championship.

The team departs the island on Thursday June 27th and swim off in the first event on Friday 28th 2019.  Head Coach Gerson Escobar assisted by Andrew Hopkin will accompany the team. The Team will be managed by Chad Hyson, and GASA’s President Peron Johnson will serve as head of delegation. Mr. Divon St. Paul Physiotherapist attached to the Ministry of Sport will also accompanied the team