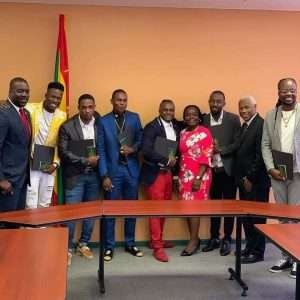 Tourism Minister Clarice Modeste; Youth Minister Kate Lewis and Infrastructure Minister Gregory Bowen, were all present at the signing of the agreement as Members of Parliament for the constituencies from which each artiste hail from.

Their appointments were of a result of their commendable performances in International soca monarch held in Trinidad earlier this year in which 5 of the 6 placed in the top 3 of the competition with Dash being the only one who didn’t represent. The eventual winner of the event, Mr. Killa, was already appointed the honour.

The new representatives of the island were presented with green colored passports which will allow them to easier access countries which recognize the passport, making life easier for them to get through immigration and unto customs clearance points when presented.

Permanent Secretary in the Ministry of Culture Desiree Stephen explained to each artiste the terms and condition for the which they are to adhere to as culture ambassadors. One of the terms explained was the revocation of the passport in which she said “Anything that can bring in disrepute to the holder and by extension the country can result in the revocation.”