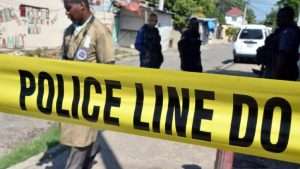 The deceased have been identified as:

A male child and another man who were also injured in the shooting, remain hospitalised.

Reports from the Major Investigation Division (MID) are that about 9:25 p.m., the males were among a group of persons playing games along the pathway. They were reportedly approached by armed men, who opened gunfire, hitting them.

Investigations are ongoing into the incident.