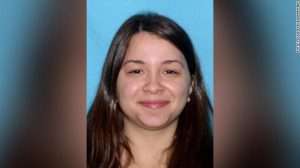 CNN- A 28-year-old woman living at her parents’ house shot and killed her stepfather and her own daughter after midnight on Monday, police in Florida said.

Port St. Lucie police say Alyssa Marie Torres shot and killed Felix Rivera, 54, and her young daughter at the Waterleaf Townhomes Apartments. Torres also attacked her mother Marisol Rivera, 53, who suffered injuries that were not life-threatening, police said.
Police said Torres’ daughter was 8-year-old; family members told CNN affiliate WPTV that the girl was 7.
Torres then fled the scene, and she was located and arrested without incident in nearby Fort Pierce at 10:30 a.m. after a manhunt, police said.
Authorities said she admitted to shooting her family members and appears to have acted alone. She will be charged with two counts of murder and one count of aggravated battery with a deadly weapon for the incidents, police said.
“She is cooperating so we anticipate we will get a full story,” Port St. Lucie Police Detective Sgt. Terry Henkel said.
Torres had been living at that residence for a couple of months, Henkel said. He said there had been some disturbances regarding family members at the house previously, although none were criminal.