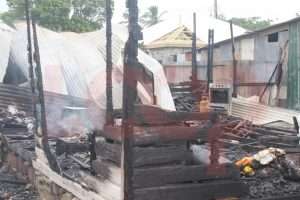 It also claimed the lives of its residents, 82-year-old Barbara Ira Forde and her 52-year-old son Carlton.

A statement issued by Police this morning said the fire of unknown origin, which occurred around 9:45 pm, completely destroyed the three-bedroom wood and wall home.

The Chief Fire Officer and nine other officers along with two tenders responded from the Probyn Street Fire Station.