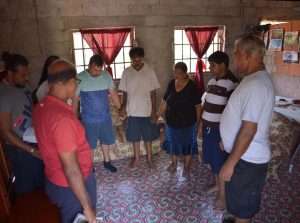 trinidadexpress.com- A SPIRITUAL leader who attempted to exorcise a ‘buck’ allegedly terrorising a Gasparillo family in March was shot multiple times on Tuesday.

Anil Jaimungal, also known as “Baba Anil”, is in critical condition at hospital.

Jaimungal, 37, was attacked outside his house at Syncline Road, Santa Flora.

Around 11.45 a.m. Jaimungal was outside his home under a shed with his mother Deokie Jaimungal when a man in dark coloured clothing and a black hat and carrying a back bag walked up the hill towards their home.

The mother told police that she asked Jaimungal if he knew the man and he said he did not.

The man walked up to Jaimungal and pulled a firearm out from the bag and fired twice at him.

Jaimungal fell to the ground and the man fired three more times at close range.

The assailant then ran down the hill and escaped in a waiting silver Nissan B14.

The mother called for help and Jaimungal was taken to the Siparia District Health Facility, then transferred to the San Fernando General Hospital.

He is being treated for wounds to the chest and back.

Ag Sgt Sobie and other police officers of the Santa Flora Police Station responded and retrieved five spent shell casings from the scene.

Police said they do not yet have a motive for the shooting.

In March, a Gasparillo family claimed a buck (folklore creature) was terrorising them in their home, and several spiritual leaders visited with them.

When the Express visited the home of the Mathuras at Hilltop Drive, Jaimungal and one of his followers came to the home to pray and counsel the family.

Jaimungal, who had long dreadlocks and multiple body piercings, told Express that he studied all religions.

He insisted that he did not want his photograph taken as he met with the Mathuras.

Jaimungal read Psalms 36 and 37 from the Holy Bible and prayed with the family that day.