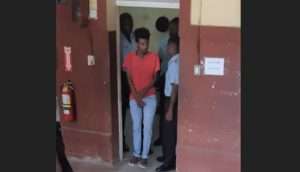 Persaud was not required to plea to the charge which alleged that on June 16, 2019, he wounded Jones at Little Diamond with intent to commit murder.

Prosecutor Gordon Mansfield told the court that on the day in question, Persaud asked his mother for food but she refused and so he became abusive towards his mother.

It is further alleged that Jones intervened when Persaud stabbed him with a sharp object.

The Prosecutor said that the victim is currently in the Intensive Care Unit of the Georgetown Public Hospital in a critical condition.

The accused, however, has a different version of what occurred. He told the court that he was eating when his stepfather attacked him from behind with a cutlass and chopped him several times.

Persaud, who does not have legal representation, said he ran to his neighbour’s yard for help.

Prosecutor Mansfield explained that Persaud received his injuries when he scaled the neighbour’s fence which has spikes.

The accused was remanded to prison until July 8, 2019; the Magistrate also ordered that Persaud seek medical attention for his injuries.