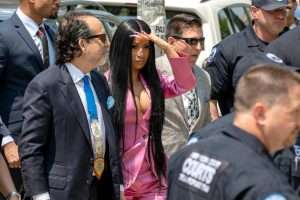 COMPLEX -Cardi B, according to a TMZ report filed early Friday, has been indicted by a grand jury on multiple charges related to a New York strip club incident that’s been in and out ofheadlines in recent months.

The 14 charges include misdemeanor reckless endangerment, criminal solicitation, conspiracy, harassment, and assault, as well as two counts of felony attempted assault with intent to cause serious physical injury. Previously, Cardi rejected a plea deal in connection with the incident, which—as mentioned in previous reports—revolves around two women who claim to have sustained injuries during a fight they allege began because of a request from Cardi.

Thursday night, Cardi was honored with the Songwriter of the Year award at ASCAP’s Rhythm & Soul Music Awards in Beverly Hills.

“[With] everybody saying I’m not this or that, sometimes I gotta see it and feel it for myself because it’s hard,” Cardi said when accepting the award, per Billboard‘s rundown. “Every

Earlier this month, Cardi rightfully fired back at a goober who tried to question her songwriting skills, telling said person to, “Eat it up, bitch.”