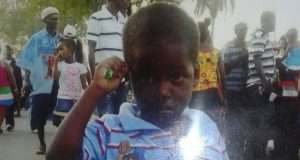 GUYANA NEWS ROOM -Thirty-one-year-old Sonya King on Tuesday admitted before Justice Navindra Singh to killing her eight-year-old son in 2016 by suffocating him with a bed sheet.

King was initially charged with murder but opted to plea to the lesser count of manslaughter when the matter was called at the Georgetown High Court.

The woman admitted that on February 21, 2016, while at La Parfaite Harmonie, Onderneeming, West Bank Demerara, she killed her son, Emmanuel King.

She was represented by Attorney-at-law Mark Conway while State Counsel Teriq Mohamed, Tuanna Hardy, and Sarah Martin appeared for the Prosecution.

Justice Singh accepted King’s plea and adjourned the matter to July 16, 2019, for a probation report and sentencing.

According to reports, King and her eight-year-old son were at their La Parfaite Harmonie, home when the woman placed a bed sheet over the child’s face and suffocated him.

In a caution statement the woman had confessed to the crime and had told Police “Ah just hold him down, meh son was kicking up with his foot. Ah hold down the sheet there until he stop moving and then I go and call Robert [King’s reputed husband and the child’s stepfather) and tell he I kill Emmanuel.”

At the time of the crime, King was eight months pregnant.