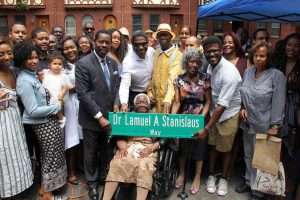 Prime Minister, Dr. the Right Honourable Keith Mitchell has applauded the initiative to rename a section of Rutland Road in Brooklyn, New York in honour of the late, Dr. Lamuel Stanisclaus, Grenada’s former Ambassador to the United Nations.

Dr. Mitchell said, “The naming of Dr. Lamuel Stanisclaus Way is a fitting tribute to a man who represented the epitome of service to the community. Through his profession as a dentist and service as a UN diplomat, he has left an indelible legacy. He demonstrated great love for his country and was an advocate for small states at the UN.”

Dr. Stanisclaus, who was born in Petite Martinique, served as Grenada Ambassador Extraordinary and Plenipotentiary Representative to the United Nations from 1985 to 1990 and again from 1998 to 2004.