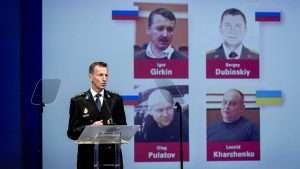 CNN-Four people will be charged with murder and causing the crash of Malaysia Airlines Flight 17, five years after the plane was shot down in eastern Ukraine killing 298 people, international investigators said Wednesday.

The Joint Investigation Team (JIT) said it would issue national and international arrest warrants for the four suspects. Three Russians, Igor Girkin, Sergey Dubinskiy and Oleg Pulatov, were named, along with Ukrainian Leonid Kharchenko.
The flight was on its way from Amsterdam to the Malaysian capital Kuala Lumpur in July 2014, when it was shot out of the sky over territory held by pro-Russian separatists.
According to investigators, Girkin is a former colonel of Russia’s Federal Security Service (FSB), Dubinskiy was employed by Russia’s military intelligence agency GRU and Pulatov was a former soldier of the Russian special forces, Spetsnaz-GRU.
Ukraine’s Kharchenko had no military background, but is believed to have led a combat unit in Donetwsk in July 2014.
While the suspects are not accused of firing the missile at MH17, they are “just as punishable as the person who committed the crime,” Dutch prosecutor Fred Westerbeke said.
All four are charged with “causing the crash of MH17, leading to the death of all the people on board … and murdering 298 passengers of flight MH17,” Westerbeke said.
He added that they are suspected of obtaining the Buk missile “with the goal to shoot a plane.”
The trial of the four men will take place on March 9, 2020 at the Schiphol Judicial Complex in Badhoevedorp, investigators said, adding that the accused will be tried in absentia if necessary.
Investigators said they would not ask for the suspects to be extradited because the Russian and Ukrainian constitutions prohibit extraditing nationals. However added that they would ask Russia to cooperate with the investigation, and both countries to question the suspects about the charges.
During a Q&A following the briefing on Wednesday, Ukraine said it would try to arrest Kharchenko.
Later on Wednesday Russia’s Ministry of Foreign Affairs said the findings were “absolutely unfounded accusations,” and that the JIT press conference was aimed at “discrediting” Russia.
“No concrete evidence this time was shown to back up such unlawful statements,” the MFA said in a statement posted online. It also disputed that Russia has refused to fully cooperate with the investigation.
“We strongly reject such accusations,” the statement read. “From the first day of the tragedy, the Russian Federation was highly interested in establishing the truth and is ready to provide all-round assistance to the investigation.”
Meanwhile Girkin — one of the suspects who acted as defense minister for the self-proclaimed Donetsk People’s Republic — said separatists in eastern Ukraine were not responsible for downing the Boeing aircraft, adding that investigators had not contacted him about the case.
“The (separatist) rebels did not down the Boeing, and I cannot comment further or clarify,” he told Russia’s Business FM radio.
Asked if the JIT had contacted him — which is made up of five countries: Australia, Belgium, Malaysia, the Netherlands and Ukraine — Girkin said, “No, they have not contacted me.”
Investigators announced in 2018 that the flight had been brought down by a missile fired from a launcher belonging to Russia’s 53rd anti-aircraft missile brigade. Russia has repeatedly denied involvement in the incident, suggesting instead that Ukrainian forces shot down the plane.