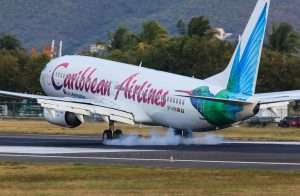 rjrnewsonline.com- An American woman who was allegedly injured when a Caribbean Airlines flight attendant reportedly pushed a food serving cart into her arm has filed a federal lawsuit against the air carrier.
The lawsuit, filed last Wednesday in U.S. District Court for the District of Connecticut, says Julie Swaby Smith was sleeping in an aisle seat during the June 2017 flight from John F. Kennedy International Airport in New York City to the Norman Manley International Airport, when the incident happened.
The lawsuit says the airline was negligent and breached its duty because it failed to properly train, supervise and monitor the flight attendants under its care.
Ms Smith’s attorney, Louis Flynn, told the Connecticut Law Tribune his client, a nurse’s aide, suffered long-term consequences.
The Connecticut Law Tribune says Caribbean Airlines’ had no comment on the matter.