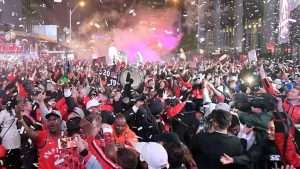 (YAHOO SPORTS) — Gunshots were fired nearby the stage where the Toronto Raptors parade celebration was taking place on Monday, leading to two arrests.

The celebration continued briefly on stage, but quickly came to a halt as everyone sought out more clarity about the situation.

However, the chaos was not limited to the site of the celebration. After the situation seemed to stabilize, there were also reports of a shooter at the nearby Eaton Centre mall.

The Toronto Police put out a tweet making the situation more clear at 4:21 p.m., confirming not only the shooting, but also stating that they’d taken two people into custody and recovered two firearms. The investigation is ongoing.