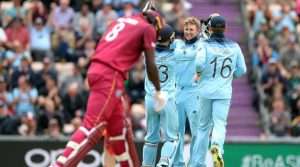 BBC- England hammered West Indies to take a significant step towards the World Cup semi-finals, but sustained injuries to Eoin Morgan and Jason Roy along the way.

Roy hurt his left hamstring and Morgan suffered a back spasm, both whilst fielding.

Despite those setbacks, England dismissed West Indies for only 212 thanks to the hostility of pace pair Jofra Archer and Mark Wood, who took three wickets each.

Still, that target could have been tricky because of the questions surrounding the participation of Roy and Morgan and the previous potency of the Windies attack.

However, stand-in opener Joe Root, who had already taken two wickets with his off-breaks, stroked his way to a classy unbeaten century.

He added 95 for the first wicket with Jonny Bairstow, then 104 with Chris Woakes, who was promoted to number three, as England won by eight wickets with 16.5 overs to spare.

England move up to second in the 10-team table, one point behind leaders New Zealand. Wins against Afghanistan on Tuesday and Sri Lanka next Friday would put them on the verge of the last four.

West Indies play Bangladesh on Monday knowing that defeat would put them on the brink of elimination.