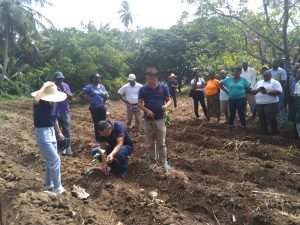 With the onset of the rainy season, the Ministry of Agriculture is placing emphasis on root crops and its yielding potential to the market.

In this regard, a collaborative effort between the Southern Agricultural District of the Ministry of Agriculture and the Chinese Agricultural Mission at La Sagesse, St. David, has open farmers’ minds to a new and more yielding method to planting sweet potatoes.

Agricultural Extension Officers, farmers and 4-H’ers convened at the Chinese Farm at La Sagesse for a teaching forum on how the Chinese cultivate their sweet potatoes.

The method, which seemed to be a tad bit easier than the local technique used, encouraged the participation of the 4-H’ers, who are ready and willing to put into practice at their respective school farms what they have learnt, as there are plans to have a demonstration at three primary schools; Woburn Methodist, St. Michael’s RC, and Calliste Government.

With this easier and more profitable method, the Liaison Officer, Mary Sylvester is convinced that the output of the session will be beneficial to the farmers.

“Now that we have the scarcity of provision, I think the timing is good. We have good alluvial loam soil, we have the planting material and we into the rainy season now, so I think it was very good timing. It is a quick method that you can use for selective harvesting in a short time; two months, rather than three months,” Sylvester said.

Chief Extension Officer within the Ministry of Agriculture, Randolph Shears, is encouraged by this new technique, and is hopeful that it will be applied by farmers.

“We are hoping that coming from this session today our farmers are going to try the new technique; compare it with how they normally plant and at the end of it, they would do their own evaluation. At the session today, we had a number of Extension Officers; they observed the technique, they saw the results and in going out and advising farmers, they will introduce that new technique to the farmers who were not here,” he said.

Retired employee with the Ministry of Agriculture and longtime farmer, Gregory Hagley, commended the Ministry on such an initiative and relayed his excitement towards applying the method learnt during the session.

“The difference in production between the Chinese and the local farmers is the method in which the Chinese do their land preparation. They use organic manure, they use NPK fertilizer manure and its different to most of the farmers who sometimes use only organic manure or they use no manure whatsoever but I think the gist about it is, I think we were not accustomed with that method of using the five nodes of the leaves to plant and get the kind of production that you getting. So, I am going to try and see if I am successful and then I can spread the news to other people,” Hagley remarked.