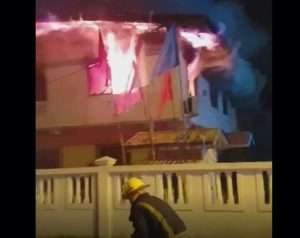 trinidadexpress.com- Three people have died in a house fire in Aranguez.

Fire officers were called to the sprawling house at Samaroo Street around 3a.m. Wednesday.

When they arrived neighbours had rescued tenants from the ground floor apartments.

The screams of the victims could be heard but there was no way of getting to them.

When the fire was put out, fire officers found the victims who were named as 70-year-old Rajkumar Singh, his 68-year-old wife Leela Singh, and their 35-year-old son, Shiva Singh.