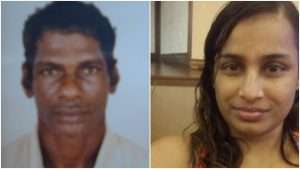 newsroom.gy- Martin Baker, the man who disappeared with his wife in the wee hours of June 4 and was arrested Friday last has been slapped with four charges, including kidnapping.

Baker, 50, of Warren Village, East Berbice, appeared at the Albion Magistrate’s Court on Tuesday before Magistrate Alex Moore where he was charged with abduction with intent to cause the person to be secretly confined. He was charged under the Kidnapping Act Chapter 10:05.

Baker was not required to plea to the indictable charges. He was remanded to prison and will make his next court appearance on July 12th 2019.

Baker was arrested on May 31 and kept in Police custody after his wife made a report against him.

But when he was released on June 3, the woman left the home with her two children, one two months old and the other two years old. However, while she was staying with a friend and his family, they were awakened by loud sounds at around 01:00 A.M on Tuesday.

Upon investigation, the family found that Baker had kicked down the front door and grabbed “Jenny” out of the house.

Speaking with the Newsroom, the friend, Jaipaul Jaimal, recalled Baker was armed with a cutlass and as he and his sons tried to intervene they were threatened.

“He break down the door, grab she and start broadside she.” He then dragged the woman away.

But the evening of Tuesday last, he returned with Jenny to Jaima’s home to pick up the children. As the woman went upstairs, Baker waited for her under the house.

Jaipaul again contacted the Police, but by the time they arrived, the man had already left with the woman.

He went on to say while Sumara was in the house, she briefly showed his wife her bruised and battered body.

The woman said she would have returned Wednesday morning but she did not show up.

The couple were eventually found by Police at a house in Enmore on the East Coast of Demerara on 7th June and taken to Berbice. There, the woman detailed to police the ordeal she suffered at the hands of her husband and he was placed before the courts.