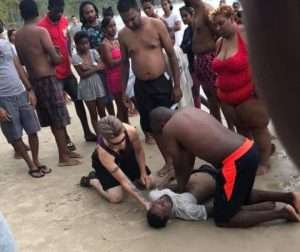 trinidadexpress.com-Lifeguards protesting health and safety issues at their headquarters have been staying away from duties at the Maracas beach.

As a result, there was no immediate help for a Penal man when he began floundering in the water on Sunday.

Lifeguards from the neighbouring beach at Las Cuevas were called to assist. They arrived half an hour after the Raj Sonnylal was brought ashore.

He died at hospital.

A police report said that Sonnylal, 29, of Penal, was bathing with relatives in the bay when around 11.15 a.m. when they got into difficulties.

His relatives made it out the water, but noticed that Sonnylal was not with them.

Relatives went looking for lifeguards, but were told that they were engaged in strike action.

One of Sonnylal’s relatives sought help from the Maracas police station, and returned with two officers.

Sonnylal was seen floating near the shoreline around 11.35 a.m. and pulled out from the water.

A team from the US Marines, including Dr Buffong, began cardio pulmonary resuscitation on Sonnylal, assisted by lifeguards of the las Cuevas lifeguard station.

An Emergency Health Services ambulance took Sonnylal to the Port of Spain General Hospital where doctors attended to him.

He was warded on the Intensive Care Unit but died overnight.

National Union of Government and Federated Workers (NUGFW) representative for the lifeguards Augustus Sylvester told Express that there are numerous health and safety issues at the facilities at the lifeguard quarters at Maracas, and lifeguards have opted to stay away.

Sylvester said that under the current PNM administration, the lifeguard division was moved from the charge of the Ministry of Tourism, to the Ministry of National Security.

Sylvester said that among the health and safety issues were the dead rats and bat droppings in the building, malfunctioning toilets, with one of them clogged and sewage flooding the toilet area, faulty water pump, and no air conditioning.

The lifeguards, who are scheduled to work from 10 a.m. to 6 p.m. instead sign the register, stay a few hours on the job and leave, Sylvester said.

“The issues that were raised with the ministry of national security for some time now and no attempts have been made to deal with these issues. It is unsafe for the workers to operate from that building. For the last three weeks the lifeguards are going to sign the book and remain a short while then depart from the building”, said Sylvester.

“The ministry is not doing anything to settle these issues. These issues are reported almost on a daily basis to the ministry. The workers think that the only option that they have to secure themselves is to stay away”, said Sylvester.