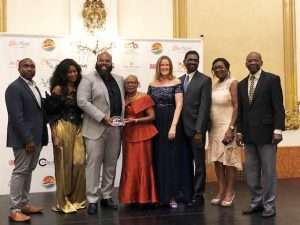 Caribbean Week in New York, hosted by the Caribbean Tourism Organization (CTO), proved to be a successful endeavor for the promotion of Grenada’s tourism product. Grenada’s delegation was led by Chairman of the Grenada Tourism Authority (GTA), Mrs. Brenda Hood, Ms. Patricia Maher, CEO of the GTA and Director of Sales (USA), Mrs. Christine Noel-Horsford. The destination’s participation in the week-long schedule of events which ran from June 2 to 7 was supported by the island’s North American public relations agency Zapwater Communications, under the leadership of Vice President and account manager, Jennifer Johnson.

During this year’s award dinner, media coverage that showcased Grenada’s dynamic culture and rich industry offerings won three awards in the categories of Best Feature Article In a US-Based Trade Publication written by David Swanson in TravelAge West; Most Outstanding Social Media Coverage of An Event by Francesca Murray with coverage on Grenada Chocolate Fest and Best Caribbean Travel Blog by Kered Clement. In addition to the media awards, Mrs. Brenda Hood, Chairperson of the GTA received the CTO Allied Member Award for more than twenty years of outstanding service and commitment to the destination’s industry growth and development.

The week closed off in true Caribbean-style with a night of music, dining and dancing at CTO’s Rum and Rhythm Benefit and Auction, held at the historic, Capitale in New York. Grenadian designer to the celebrities, Fe Noel, was a specially invited guest at the Grenada Lounge and international soca artist, Skinny Fabulous entertained guests throughout the evening.

“This is a proud moment for Pure Grenada as we are truly humbled by the awards given to our media partners for the outstanding work they’ve produced about Grenada as well as the recognition given to Mrs. Hood for her unwavering service to the destination’s tourism sector,” commented CEO Maher. “We are grateful for all the opportunities and platforms provided by Caribbean Week and look forward to even bigger and better things in 2020.”