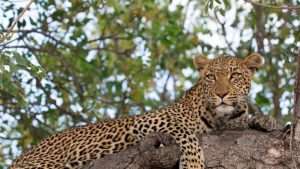 bbc.com- A two-year-old boy has been killed by a leopard in South Africa’s Kruger National Park.

The leopard managed to access a fenced off area of the park and grab the boy, who was the son of an employee.

Family members rushed the boy to hospital but he was pronounced dead on arrival.

The park said in a statement that such attacks were “very rare”, but rangers killed the leopard to “remove the danger”.

Ike Phaahla, a spokesman for the park, said the exact circumstances of the toddler’s death remained unclear.

He said that animals were naturally afraid of human beings and did not usually get close to them.

“In parks like the KNP predators do interact with tourists and staff and at times it may result in species like leopard getting habituated to people and losing their fear,” Mr Phaahla said.

Park visitors followed strict rules to stay safe from animals, such as locking gates and travelling in groups, he said, adding that a leopard would be “very brave” to attack a fully grown adult but might “take a chance with a child between two to six years old”.

He said that people visiting and working in the park were given as much protection as possible with accommodation fenced off to keep animals out, but said they found ways of getting in.

“We have to respect that they are wild animals,” he said.

“This is the risk we live with on a daily basis as we help conserve our species for the benefit of all,” he said.