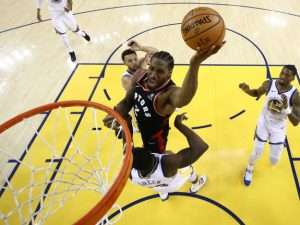 fivethirtyeight.com- With Kevin Durant still sidelined by the calf he injured nearly a month ago, Kevon Looney out indefinitely with a fractured collarbone suffered in Game 2 and Klay Thompson sitting out a playoff game for the first time in his career,1 it was clear before the game started that the Golden State Warriors would need a Herculean effort from Stephen Curry in order to win Game 3 and take a 2-1 lead over the Raptors in the NBA Finals.

Golden State got that Herculean effort. And it wasn’t enough.

In fact, it’s difficult to imagine Curry playing a better game: Steph scored 47 points, snared eight rebounds and dished out seven assists. He became the first player in finals history to score 45 or more while also recording five or more rebounds, assists and made 3-pointers. And yet the Warriors trailed for almost the entire game and lost by 14 points at home. Curry’s 47 points are now the second-most ever for a player in a losing NBA Finals effort, behind only the 51 scored by LeBron James in Game 1 of last year’s finals.

Combined with his 16 assisted points, Curry created 63 of the Warriors’ 98 points while he was on the floor, a truly incredible feat. Those 63 points tied for the second-most points he’s created in any playoff game during the Warriors’ five-year run of excellence. They also marked the sixth time that Curry has created at least 60 points via his shots and assists — though this is the first time he has done so in a loss.

The Warriors fell largely because Toronto got whatever it wanted on offense for the entire game. Golden State yielded 123 points to the Raptors — the most it has allowed in any NBA Finals game at Oracle Arena under Steve Kerr. All five of Toronto’s starters scored at least 17 points, and they combined for an incredible 106 points on just 70 shot attempts. The Raptors all together connected on 43 of 82 shots from the field, 17 of 38 from beyond the arc and 20 of 21 from the free-throw line, recording just the 42nd 50-40-90 game2 in NBA playoff history and only the third in the history of the finals.

Their offense was in blitzkrieg mode right from the jump. Toronto scored 15 points in the first four and a half minutes of the game and eventually totaled 36 in the first quarter. They ended up scoring 1.44 points per possession in the opening period — the most efficient quarter either team has had during the series. The Raptors’ only blemish was a five-minute stretch in the second quarter where they turned the ball over three times and shot 0 of 6 from the field. Otherwise, they were practically unstoppable. Toronto even scored a completely absurd 1.59 points per possession on tries that began after a made Warriors basket.

It was a total group effort — the kind of “Strength in Numbers” victory the Warriors themselves love to claim. Kawhi Leonard, while clearly still playing at least somewhat hobbled, nevertheless continued his metronomic consistency. Leonard finished with 30 points, seven rebounds, six assists, two steals and two blocks, and he paraded to the free-throw line nearly at will.

Danny Green — who is now officially out of the shooting slump that plagued him throughout the Eastern Conference finals after apparently getting some shooting advice from Shaquille O’Neal, of all people — nailed three 3-pointers during the aforementioned first quarter, giving him multiple triples in all three games of the series. Though Raptors coach Nick Nurse chose to start Fred VanVleet over Green after halftime to keep his best Steph stopperon the floor, Green ended up nailing another three treys after the break.

After a Game 2 in which he largely struggled near the rim, Pascal Siakam connected on 7 of 12 shots from inside the paint. Siakam tallied six assists as well and was a game-high plus-22, marking the third time during Toronto’s 21-game playoff run where the Raptors have outscored their opponent by at least 20 points with Siakam on the floor. Kyle Lowry played perhaps his most complete game of the playoffs, pouring in 23 points while dishing out nine assists.

The starters were not the only Raptors in double figures. VanVleet, still piping-hot since the birth of his son, scored 11 points and made three 3-pointers — including an utterly ridiculous shot-clock-buzzer-beating circus shot while falling down that pushed the Raptors’ lead to 13 points with less than two minutes remaining and sparked the beginning of garbage time.

The lone Raptor to record a basket but not reach double figures was Serge Ibaka, who nonetheless had quite an interesting game. Though two of them likely should have been disallowed and called goaltending, Ibaka officially ended the game with six blocks, marking just the 17th time in NBA Finals history that anyone has thwarted that many attempts. The clean swats were all of different varieties: a chasedown in transition, two different help-side blocks on the drive and one where he planted himself in the paint and dared Curry to challenge him, then stepped up to block a floater when Curry took up the dare.

The varied contributions put the Raptors two wins away from claiming their first NBA title in franchise history. Teams in their position — coming off a victory in Game 3 of a finals series that was previously tied at one game apiece — have gone on to win the series 82 percent of the time. The Raptors, though, have two different players — Marc Gasol with the 2015 Grizzlies and Ibaka with the 2016 Thunder — who have found themselves up 2-1 in a playoff series and have still gone on to lose the series to the Kerr-era Warriors. They should know better than anyone else that against an opponent this good, nothing is guaranteed.

Especially when the Warriors may soon be getting some rather important pieces back. Kerr said after the game that he expects Thompson to return for Game 4, while Durant played coy about his potential readiness, suggesting the possibility that he could return from his monthlong absence as well. While the return of one or both stars would certainly increase the chances that the Warriors come back and win the series, such a comeback is unlikely to come easily — no matter what Draymond Green might say.