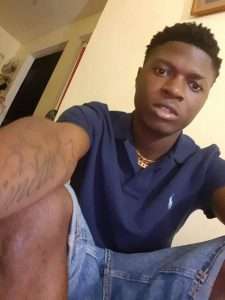 newsday.co.tt- Kadeem Johnson, 18, survived a fire in 2011, in which four of his cousins died and several relatives were injured. Johnson was only 10, when he had to jump from the burning building at Trou Macaque, Laventille.

Sadly, the aspiring DJ was shot dead on Tuesday night near his home at 16th Street, Oropune Gardens, Piarco.

His relatives yesterday lamented his “senseless murder” and said that it seems “the innocent is paying for the guilty”, as rumours of gang warfare circulate around the HDC housing scheme.

Johnson’s mother, Kimette, 38, received the news onboard a Royal Caribbean cruise ship where she works.

“I was never to bury my son, he was to bury me. I work hard for him. He was my all. They take away everything from me, everything. My whole heart gone, why, why? He ain’t deserve to die like that. He don’t interfere with nobody. He said, ‘Mammy I will work, time for you to stop. I will make you proud, you wait and see,” she said yesterday.

The cruise line was trying to secure a flight for Johnson to return to Trinidad from the private island where it was docked.

The slain teen’s grandmother, Beverly Julien, 55, said she had warned her grandson about visiting the area where he was killed.

“I begged him not to go across there, but he would say, ‘I not involved in anything, nothing will happen to me.’ …But Kadeem knew the residents in those buildings because we all came from Trou Macaque, from the fire. We all suffered in that grief and tragedy, now they kill him?” she questioned. The area where Johnson was killed was referred to as Trou Macaque where there have been several shootings.

Johnson’s father Peter Skair said he got the news of his death just before midnight on Tuesday.

Skair, who lives Diego Martin, said he drove to Oropune, still praying that his son was only injured and not dead.

“He was very, very ambitious. This was just so senseless, I sure all who involved knew my son. They knew he was not tangled in anything. What’s the sense in shooting up an area and taking innocent lives. What that doing for you all, what purpose it serves?” asked the grieving father.

Johnson, a former student at Success Laventille Secondary School, whose professional name was DJ Kiddo, had a chance to perform at Boom Champions 94.1 FM last year.

His relatives said Johnson’s mother had arranged a surprise gig for him at the station, for his 18th birthday last October.

An official of the radio station extended condolences to Johnson’s family.

“The station will always show remorse for any death, whatever the circumstances and certainly extends sincere condolences to Kadeem Johnson’s family and friends,” said the official.

Johnson recently started a job at Ramco Gas, three weeks ago. He was scheduled to enroll in classes to attain the necessary subjects to join the Defence Force.

A relative Johnson played as a DJ in the village and at events he was invited to.

“Music and his car, that was all Kadeem was about. He now get that car. Now start to pimp it out. He only went his first car show over the weekend and told his mom he would win several trophies at car shows for her. She had bought it awhile ago and left it at a garage to fix up. He got it on Saturday,” said the relative.

She said it hurt her to explain to her three sons why they won’t see their cousin anymore or hear him blasting music from his room or car.