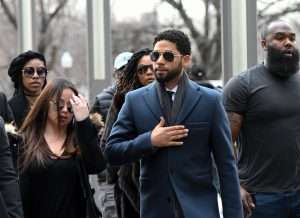 Daniels was responding to a Variety report in which multiple production sources said that “Empire’s” writing staff was breaking ideas for the show’s sixth and final season with the expectation that Smollett would appear in the back half of the 18-episode season.

This is the first public acknowledgment that Smollett will not return for the final season of the Fox drama series. He was written out of the final episodes of the show’s fifth season following severe backlash stemming from accusations the actor and musician faked a hate crime against himself earlier this year in Chicago.

Multiple “Empire” cast members penned a letter back in April that was sent to multiple Fox executives and series executive producers. “Together, as a united front, we stand with Jussie Smollett and ask that our co-star, brother and friend be brought back for our sixth season of ‘Empire,’” the letter read. It was signed by “Empire” stars Taraji P. Henson, Terrence Howard, Bryshere Y. Gray, Trai Byers, Gabourey Sidibe, and Nicole Ari Parker.

When the sixth season renewal was announced in April, Fox Entertainment and 20th Century Fox Television said that they had extended Smollett’s option for Season 6 but that there were no plans for him to return. Two weeks later, Fox announced that the sixth season would be the show’s last. Prior to the events of this year, Smollett was a key cast member on “Empire.” His character, Jamal Lyon, is loosely based on Daniels.

Smollett claimed that he was the victim of an assault which he said was racially and politically motivated, as well as homophobic. Later he was accused of hiring the men who attacked him and indicted for filing false statements. The criminal charges were dropped in March, and Smollett has maintained his innocence, but the city of Chicago has filed a $130,000 lawsuit against Smollett in order to recoup the cost of the police investigation.

The records in Smollett’s case were originally sealed, but a judge ordered in May that thousands of pages of documents on the case be released. Among the documents released were police statements from the Osundario brothers, who claimed that Smollett paid them to stage the attack, as well as text messages from the office of Cook County State’s Attorney Kim Foxx.

As Variety previously reported, Foxx has faced criticism for her office’s handling of the Smollett case. In the newly released messages, Foxx discusses recusing herself from the case, which she says was based on a false belief that she was related to Smollett.

Another batch of documents is due to be released later this week. Approximately 70 hours of surveillance videos and bodycam footage that was collected by Chicago detectives during the course of the investigation is also expected to be released to the public.