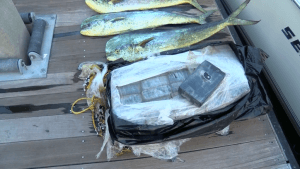 ABC NEWS- A South Carolina fisherman brought in quite the haul, but it wasn’t a bountiful of fish.

The fisherman hooked a bag off the coast and when he pulled it aboard, he discovered 30 to 50 kilos of cocaine worth nearly $1 million.

It was found about 70 miles southeast of Charleston.

When the fisherman realized what was in the bag, he immediately notified the Coast Guard.

Police, working with federal authorities, say they now know the source of the drugs.

The fisherman was praised by authorities for doing the right thing.