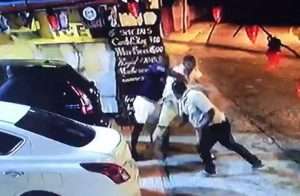 TRINIDAD EXPRESS- A deejay was chopped in the head at a bar in Ste Madeleine on Saturday night.

The suspects, an off-duty police officer and soldier, were detained by police.

Police said the incident occurred at Corinth Settlement, at around 9.15pm.

The victim, 39-year-old Kevin Nedd, was performing at the bar.

Police said Nedd was seen talking to the two men when they began slapping and beating him.

The 26-year-old police officer, who is on injury leave, began chopping the deejay.

The soldier also beat Nedd severely about the body.

Patrons attempted to intervene but were threatened by the men, police said.

Nedd collapsed in the parking lot bleeding as the men ran away.

He was taken to the San Fernando General Hospital in critical condition.

The suspects were detained later that night.

Police are yet to determine the motive for the attack.