Couple Drowns In Trinidad — Boyfriend Died Trying To Save Her 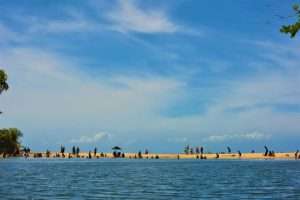 TRINIDAD EXPRESS- A STE Madeleine couple drowned at a beach in Blanchisseuse on Thursday.

Cliff Walker, 37, died while trying to save his girlfriend Liloutee “Cindy” Bhagwandeen, 52, of Tarodale Gardens.

Police were told that villagers pulled them out of the water and administered cardiopulmonary resuscitation, but were unable to revive them.

Neither of their families knew they were going to the beach and were surprised to learn of the double tragedy.

Walker and Bhagwandeen were bathing at St James bay when around 1.45 p.m. she got into difficulties.

Bhagwandeen tried to save her, but as she grabbed onto him he too went beneath the surface.

A man who was on the beach commented on the Express Facebook page said that that he saw Walker before tragedy struck.

The person commented: “Life is so short eh. I was the unfortunate opportunity to witness this at the beach yesterday. I remember that rasta guy casually strolling past me and my family. I lay down on the sand, took a nap and then got up to leave. Upon leaving I noticed the man lying on the sand all stretched out. I thought he was taking a sleep. Then to notice that he drowned and some people laid him out there and left. He was frothing from the mouth. I continued walking and noticed they placed the lady a little lower down on the beach and covered her with a towel because the ocean washed away her clothing”.

“Witnesses said that the lady got into difficulty and the guy tried to save her. She tried holding on to his hair/ head to stay above her water causing him to go under and she did after. They were bathing by some rocks and villager said that there are bad underwater currents there and people always drown because they come on the beach ad they just bathe anywhere. The beach has no lifeguards. May their souls RIP”, the person wrote.

Walker’s sister, Kelly Walker, said her brother loved Bhagwandeen and they were always together.

“That was the kind of person he was. He was awesome. They were in love. They were always together”, said Kelly Walker.

She said her brother, who worked as a ‘ph’ taxi driver, loved to take long drives to beaches and rivers.

Bhagwandeen’s neighbour and close friend, Mala Singh, said on Wednesday Bhagwandeen came to her home and did not tell her she was going to the beach.

Singh said that Bhagwandeen worked in the Marabella Public Market as a janitor, and they would talk to each other almost every day.

“On Wednesday night she sat down by me and made jokes with my children. She was such a jolly, loving person, who worked very hard. Last night when we got the news in the village we could not believe it. We opened the house and lit candles and remembered them. I still cannot believe that she is gone”, said Singh.

Autopsies are expected to be done on Friday at the Eric Williams Medical Sciences Complex.

Facebook
Twitter
Pinterest
WhatsApp
Previous articlePrime Minister Offers Words Of Encouragement To Traffic Wardens And Warns Them To Not Be Intimidated
Next articleTrinidad: Deejay Chopped, Beaten By Off-Duty Cop And Soldier