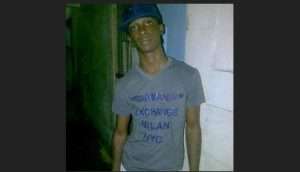 NEWS ROOM GUYANA- Police Headquarters in the wee hours Friday confirmed that the third bandit who surrendered to the Police succumbed to multiple gunshot injuries at the Georgetown Public Hospital Thursday night.

After almost an hour of exchanging gunfire, the three bandits were all shot dead by Police after they held construction worker Neville Leslie and his 5-year-old son at gunpoint in his Norton Street, Lodge home.

Police Headquarters identified two of the bandits as Shawn Brown and Junior Nurse; the other is yet to be identified. Browne Jr. is the son of the late prison escapee Shawn Browne who was also shot dead by the Police several years ago.

At the end of the shoot-out, three 9mm pistols and two cellular in close proximity of the crime scene, while a Police Corporal received a gunshot injury to his left leg, Police Public Relations Officer Superintendent Jairam Ramlakhan revealed.

“The injured policeman is presently receiving medical attention; the Force wishes him a speedy recovery and applauded their courageous actions that resulted in the demise of the bandit,” Superintendent Ramlakhan said in a statement.

Police said that the 46-year-old construction worker was in the lower flat of his house with his son when the bandits attacked at around 8:30am.

They robbed him of a sum of cash and two laptops; as they were interrogating the victim about his sister-in-law who recently arrived in Guyana from the U.S, Police ranks on patrol in the area were alerted and responded.

“The suspects all armed with handguns began shooting at the Police who returned fire and adopted tactical positions and engaged the bandits in the house by which time the victim and his five-year-old son managed to escape and seek refuge nearby,” the Police statement noted.

The homeowner, who is a construction worker, told a reporter at the scene that he jumped through a window with his five-year-old son after the men invaded the house.

The victim said he pleaded with the bandits not to take his daughter’s laptop since she started teaching recently but they threatened to shoot him and his son.

“Them man tell me shut up, they [will] shoot me, plus me son if I don’t keep he quiet,” the distraught man said.

According to the victim, he overheard the bandits say to each other, “we gon gah treat this boy how we treat everybody else, tie up this man!”

He said when the bandits attempted to tie him up with a shoelace, one of them looked through the window and saw the police outside and that’s when he escaped with his son.