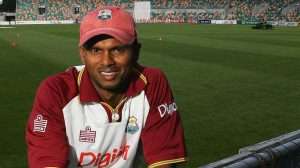 (NEWS ROOM GUYANA) — Shivnarine Chanderpaul has debunked claims in an online article, which reported he died on Tuesday morning following a vehicular accident “at the Toronto Mall” Monday night.

The article, titled ‘Man knocked down by vehicle in Toronto identified as Guyanese cricketer Shivnarine Chanderpaul’, appeared on www.cbtvn.com.

It claimed Chanderpaul was knocked down by a Honda Civic.

The article claimed “the Guyanese Embassy in Canada has confirmed the identity of the 44-year-old and said they were aware of his visit to Toronto, Canada.”