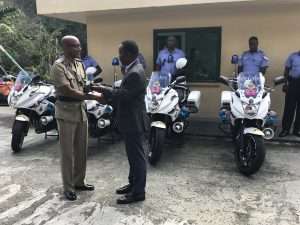 The Government of Grenada has provided additional equipment for the Royal Grenada Police Force to enhance the operation of the Traffic Department.

In making the presentation, Dr. Mitchell said it is recognition of the serious problem we face with traffic and traffic violations in Grenada. He said the Ministry of National Security and the RGPF have been examining ways to confront the problem.

The Prime Minister is optimistic that the use of the motorcycles and the initiative to introduce traffic wardens will bring about the desired result of helping to address the traffic related problems being experienced across the country.

He noted that already the presence of the wardens on the roads are helping to make a difference and said it is incumbent on the police to support them since in some instances, they attract the wrath of persons who are ticketed for violations.

Welcoming the timely donation, Acting Commissioner of Police, ACP Prince said the new bikes will definitely help officers in the execution of their duties. He said, “We are so grateful for this gift today. I can assure you that these motorcycles will be used effectively to assist in managing the traffic situation in Grenada.”

Newly installed Officer in Charge of the Traffic Department, Superintendent Randy Connaught said the donation is an indication of Government’s commitment to managing the volume of traffic and incidents along public roads. He too pledged that the new bikes will be effectively used.

He said, “There is a high volume of indiscretion being practiced on the nation’s roads. A lot of the accidents we are seeing, especially the serious accidents, are as a result of speeding. We have deployed radar guns in cars but getting to and fro through congestion in patrol cars is always a challenge. The motorcycles will be better able to manoeuvre through the traffic in a much quicker time.”