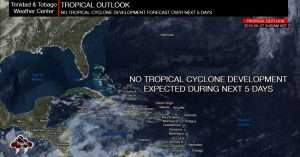 ttweathercenter.com- The first tropical wave of the 2019 Atlantic Hurricane Season, as of 8:00 AM Monday 27th May 2019, is located approximately 400 kilometers to the east of Trinidad and Tobago. The axis of this wave is located at 57 degrees west, between 14 degrees and the equator, moving west at 15 knots. At this speed, the axis of this wave is forecast to move across T&T on Monday night but the bulk of showers, possible isolated thunderstorms are forecast Tuesday into early Wednesday. This wave is relatively weak, with very little showers associated with the axis.

The designation is significant to Trinidad and Tobago because the passage of the first Tropical Wave (or the first time the ITCZ modulates across T&T) signals the start of the wet season for the islands. Following the passage of the first true (i.e. classical genesis from the African Easterly Jet and convection over North Africa for this feature) tropical wave, as designated by either the National Hurricane Center or by the discretion of the Trinidad and Tobago Meteorological Service, the wet season is declared. Hence, we’re looking towards Tuesday for the official start of the 2019 wet season.

Based on present model guidance, this first tropical wave is not forecast to be a large rainmaker, with rainfall accumulations generally 10-15 millimeters, and isolated totals up to 25 millimeters across Eastern parts of T&T. Most of the rainfall is forecast to begin after midnight (Tuesday 12:00 AM) and continue into early Wednesday.

As the wave progresses westward, the wave is forecast to dissipate as it enters the Caribbean Sea.

wave is located at 26W, producing scattered showers in the latest tropical update.

Tropical waves typically take 5-7 days to travel across the Atlantic Ocean and move across Trinidad and Tobago. As of the latest GFS, FV3, and EMCWF models in their 00Z runs on Monday, they all show a concentrated plume of tropical moisture arriving across Trinidad and Tobago next Tuesday 4th June 2019 into Wednesday, June 5th, 2019. With tropical waves, locally heavy rainfall, thunderstorms, and gusty winds are generally possible. Because this wave is still over 7 days away, it is still too soon to tell how much of a rainmaker it will be to Trinidad and Tobago, as well as any impacts.

While the official start to the Atlantic Hurricane Season isn’t until June 1st, early season tropical cyclones are not unheard of. 51 of the 89 out of season tropical cyclones in the Atlantic Basin have formed in the month of May, with the most recent being Subtropical Storm Andrea on May 20th, 2019. Thankfully, for Trinidad and Tobago, these early season systems tend to form in the Western Caribbean and Southwestern Atlantic, with no impact to the Eastern Caribbean and T&T.

However, it serves as a reminder that the 2019 Hurricane Season is rapidly approaching and it is important to become prepared for both the hurricane season and the rainy season ahead!