Three girls, All Under Age 18, Found In House With Prison Escapees 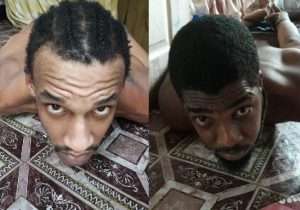 trinidadexpress.com-Three girls all under the age of 18 were found at the house in which prison escapees Olatungi Denbow and Michael Findley were hiding.

The house at Ralph Narine Trace, Harris Village, is located next to the mangrove that leads to the Godineau River, which can take a boater into the Gulf of Paria, or upstream to Woodland.

Police also raided this house. Photo: TREVOR WATSONThe house is less than a three minute drive from the South Oropouche Police Station, but it was officers of the Special Operations Response Team (SORT) that led the raid nearing nightfall Saturday.

The Express was told that officers of the Child Protection Unit took custody of the teenage children. The police want to speak with the mother.

A resident said that the two escapees had no connection to South Oropouche, but it was one of the six recaptured earlier that lived in the area once. He may have shared the hideout location.

According to a man whose house was also raided: “They kick down my door and everything, not knowing it was the wrong house. Then they came across (to the other house) They raid and found the guys. They questioned me for a whole hour”.

Residents say they are deeply disturbed that the escapees could have been lurking in the area undetected and praised the police for their intervention.

The capture of the men brought to an end their freedom bid from the Golden Grove Prison Prison, Arouca.

On the morning of May 15, the two along with six other prisoners broke out of the prison. The six others were held within 48 hours, but Denbow and Findley proved slippery.

They posted social media videos and voice notes, telling citizens they had no intention of harming anyone and would surrender on the condition that their cases can be brought before the courts, as they have claimed they are innocent.

They stated that due to the current judicial system, even though they were “innocent”, they were still spending several years — potentially up to a decade — in jail while awaiting their day in court.

They all pleaded not guilty to the offence and the matter was adjourned.

The six men have since been transferred to a cell in the Maximum Security Prison in Arouca.

They stated that due to the current judicial system, even though they were “innocent”, they were still spending several years — potentially up to a decade — in jail while awaiting their day in court.

R. Kelly Convicted Of Racketeering By A Federal Jury In New York